Objectives. Social network sites have become the web applications most used in Mexico facilitated by the use of smartphones and laptops. They have shown influence in the acquisition of healthy behaviors. The objective of this study is to determine if the use of social networking sites helps to improve vigorous recreational physical behavior.

Material and methods. In order to achieve this objective, it was necessary a systematic cluster sampling from 1927 higher education students resulting in 62 subjects who were studying sports in the largest university in Baja California, Mexico in 2017. A questionnaire based on the social-cognitive theory (eHealth Literacy Scales, developed by Norman and Skinner in 2016) was translated into Spanish and adapted to measure the consumer comfort and skill in using social network sites for improving vigorous recreational physical behavior.

Results. An excellent internal reliability of .958 was obtained for the applied test. Regarding the research question about if the use of social networking sites for the improvement of the vigorous recreational physical activity, this study can reject the null hypothesis and conclude that there are statistically significant differences in the response Agree (4) compared to either Strongly Disagree (1), Disagree (2), Undecided (3), and Strongly Agree (5) for items 21, 22, 23, 24, 25, 26, and, 27.

Conclusions. Students who do vigorous exercise are paying attention to the health-related resources available on the SNS and are using them critically to find help related to their recreational activity (sports). Thus, from the perspective of the eHealth Literacy, SNS could be considered as a media that could provide important information to promote healthy behavior regarding the vigorous physical activity.

Physical inactivity has been identified as the fourth leading risk factor for global mortality causing an estimated 3.2 million deaths globally, according to the World Health Organization (WHO, 2017, p.1). The same source reports that physical activity improves cardiorespiratory and muscular fitness, bone health, reduces the risk of no communicable diseases and their risk factors (NCDs) and depression. Doing regular to moderate physical exercises like sports or fitness bring more benefits for health: “regular moderate intensity physical activity – such as walking, cycling, or participating in sports – has significant benefits for health. For instance, it can reduce the risk of cardiovascular diseases, diabetes, colon and breast cancer, and depression. Moreover, adequate levels of physical activity will decrease the risk of a hip or vertebral fracture and help control weight”(WHO, 2107, p.1).

Nonetheless, access to the information through the Social networking sites, with around 2.46 billions of worldwide users in 2017 (***statista, 2017), involves different responsibilities and opportunities to develop healthy behaviors (Norman and Skinner, 2006). Thus, social networking sites (SNS) have become an important media based on Internet, Facebook being the most popular of them, with 1.8 billion monthly active users: “if the social media giant were a country, it would be much bigger than China” (***World Economic Forum, 2017). SNS have become important applications for sharing personal issues, getting improvement and motivation in the realization of physical activity like exercise (Boonwattanopas, 2016).

Thus, the eHealth literacy understood as “the degree to which individuals have the capacity to obtain, process, and understand basic health information and services needed to make appropriate health decisions” (Ratzan and Parker, 2000, p.vi) – in this case, exercise – is a topic that need attention in order to generate health education, “to influence not only individual lifestyle decisions, but also raises awareness of the determinants of health, and encourages individual and collective actions which may lead to a modification of these determinants” (WHO, 2017, p.1).

Looking for a better compression of the social networking sites and applications and eHealth, the main objective of this study is to determine if the use of social media helps to improve vigorous recreational physical behavior.

The physical activity, sport and exercise

2. Aerobic activity should be performed in bouts of at least 10 minutes duration.

4. Muscle-strengthening activities should be done involving major muscle groups on 2 or more days a week.” (WHO, 2017, p.1)

Exercise, for its parts, is a “physical activity that is planned or structured. It involves repetitive body movement done to improve or maintain one or more components of fitness” (O'Keeffe et al., 2016, p.5). In short, sports and exercise are included in the physical activity but differentiated by the goal of the activity as well as the level of organization, planning, and structuring. Physical activity is defined as “any activity that involves or requires some form of physical exertion. It includes sport, play, active transport, chores, games, fitness activities, recreation and some forms of work” (O'Keeffe et al., 2016, p.4).

Based on the beforehand mentioned considerations, the present study considered the category of recreational physical activity so as to include sports.

In order to understand how the use of technology could facilitate healthy behaviors such as exercise, social cognitive theory looks like adequate theoretical framework due to definition of health literacy: "the cognitive and social skills which determine the motivation and ability of individuals to gain access to, understand and use information in ways which promote and maintain good health" (WHO, 2017).

The foundations of the eHealth literacy concept are based in part on social cognitive theory and self-efficacy theory (Bandura, 1997), which promote competencies and confidence as precursors to behavior change and skill development” (Norman and Skinner, 2006).

Nonetheless, promoting and maintaining good health through technology requires the development of skills in using technology as a tool.

The Social networking sites era equivalent to health literacy is eHealth literacy, which includes basic literacy as well as information, media, health, computer and scientific literacies (Norman, & Skinner, 2006). For this reason, youth can serve as an ideal group to test a measure of eHealth literacy given this population’s high familiarity with technology (Gilstad, 2014). Thus, the adequate development of eHealth tools could protect consumers from harm and empower them at the same time, because “regardless of the population of interest, the need to navigate the Social networking sites with confidence is particularly important for health issues in which the consequences of using low quality, misleading, or false information are great” (Gilstad, 2014, p.2)

Does the use of social networking sites help to improve the vigorous recreational physical activity?

The use of social networking sites helps to improve the vigorous recreational physical activity.

A transactional descriptive study involving one sample selected from a statistical population was conducted.

The systematic sampling was conducted considering a sizeable population of 1927 students, with a confidence level of 90 percent and a margin of error of 10%. 62 students enrolled in the Faculty of Sports in the largest university in Baja California, Mexico, participated voluntarily in the study, male (N=50) and female (N=12). Originally, there were 67 students in the sample, but five students were excluded because they did not fulfill the main characteristic of the study population, which was to perform vigorous physical activity.

To achieve the purposes of the study,  an adaptation and Spanish translation of the eHEALS scale (eHealth Literacy Scales) developed by Norman and Skinner (2016) was realized. The adaptation consisted of changing all general items that ask for the use of Internet in a general sense to address specifically the use of social networking sites (all the items). From the Global Physical Activity Questionnaire (GPAQ), elaborated by the World Health Organization (2010), five questions were selected for assessing the level of intensity (moderate or vigorous) and duration (hours per day, days per week) of the reported physical recreational activity.

The statistical procedure for the data set has been as follows:  1) the internal consistency of the scale was determined; 2) considering p > .05 level of significance, the Kolmogorov-Smirnov Z test to assess the normality of variances was calculated; 3) according to the result of the normality test, it was not necessary to calculate a homogeneity test; 4) Non parametric analysis for all items was calculated, according to the results of the Kolmogorov-Smirnov Z test.

The internal consistency reliability of the overall scale, as measured by the Cronbach Alfa coefficient, was very high (α =.958).

Regarding the results of the Kolmogorov-Smirnov Z test, this revealed not normally distributed data for all the items of the instrument; therefore, a nonparametric analysis of the dataset was necessary, considering p > .05 level of significance. For this reason, the Chi-Square non-parametric test, mean, standard deviation, and percentages were calculated for the scale.

Regarding the research question, if the use of social networking sites helps or not to improve the vigorous recreational physical activity, this study can reject the null hypothesis – based on the items mentioned beforehand – and conclude that there are statistically significant differences in the response Undecided (3) for most items. 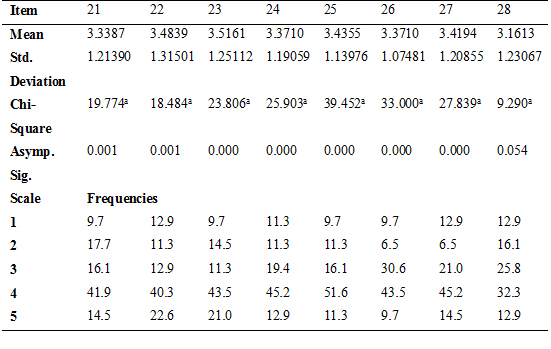 This research has found that social networking sites have not a clear influence on Health behaviors, supporting partially the suggestion made by Latking & Knowlton (2015) that social media has been successfully used for online self-help to promote health behaviors, mainly for the ease of accessibility for many individuals.

Thus, persons who do vigorous exercise are paying attention to the health-related resources available on the SNS and are using them critically to find help related to their recreational activity (including sports), but it is not clear if they are getting basic health information (health literacy) from SNS.

Other topics that should be evaluated are whether social networking sites provide a significantly greater source of social incentives for increasing physical activity in addition to social support (Zhang et al., 2016) and the critical use of information provided by SNS about health.

For a better understanding of the impact of SNS on eHealth Literacy, it is necessary to conduct supplementary research, based on empirical data, considering experimental conditions and increasing the sample size, and to compare low, moderate, and vigorous recreational physical activity. Additionally, the context and specific characteristics of the recreational activities should be analyzed.