Objectives. The aim of the study was the evaluation of the air quality in the process of food preparation in rural households of the Republic of Moldova.

Conclusions. Air quality worsens towards the end of the cooking process and in most cases it is maintained over an hour after the end of the preparation process, representing a source of indoor pollution to the whole family.

Perception, however subtle, about perceived indoor air quality, can be the triggering event of an emerging problem. Such perceptions are characterized as stuffy, bad, and dry air, unpleasant odor, dust, or dirt, for example (Schneider, 2008; Saha, et al., 2015). Indoor air pollution remains a large global health threat. One half of the world population, and up to 95% of the population in poor countries, continue to rely on solid fuels, including biomass fuels (wood, dung, agricultural residues) and coal, to meet their energy needs (Bruce, et al., 2006; Saha, et al., 2015; World Health Organization, 2015).

Cooking and heating with solid fuels on open fires or on traditional stoves generates high levels of health-damaging pollutants, such as particulates and carbon monoxide. As women are primarily responsible for cooking and as children often spend time with their mothers while these are engaged in cooking activities, women and young children are primarily affected. For example, the World Health Report (2002) estimates that the acute respiratory infection is one of the leading causes of child mortality in the world, accounting for up to 20% of fatalities among children under five, almost all of them in developing countries. This makes solid fuels the second most important environmental cause of disease after contaminated waterborne diseases and the fourth most important cause of overall excess mortality in developing countries after malnutrition, unsafe sex, and waterborne diseases (Bruce, et al., 2006; Dutta, et al., 2011; Banerjee, et al., 2012).

In addition to impacts on mortality, indoor air pollution may have long-lasting effects on general health and well-being: early exposure to indoor air pollution during childhood may stifle lung development, suggesting that the cost of this pollution may continue later in life. In fact, a growing literature indicates that environmental insults at early ages can have long-lasting influences on human health and productivity (Almond, 2006).

Indoor air pollution due to the indoor burning of polluting fuels has been associated with Acute Lower Respiratory Infections (ALRI) amongst children less than five years old (Barnes, 2005).

We decided to conduct this research because solid fuel sources are widely used in Moldova.

The study was conducted in three areas of the Republic of Moldova (northern, central and southern areas). The research has been based on the determination of some physical and chemical factors of the environment in the process of food preparation. With the help of the Air Quality Monitor 500, there have been measured the temperature and the relative humidity of the air – as physical parameters of the air – and from the chemical factors – the carbon dioxide and the carbon monoxide. The population prepares food in three different spaces (in specially equipped kitchens, in living rooms, or summer kitchens) and outdoors. Out of the 150 researched households - in 46 cases people prepared food in specially equipped kitchens, in 31 cases - directly in the room designed for living (the hobs or stoves), in 48 cases – in the summer kitchen and in 25 cases people prepared the food outdoors. During summertime, 4 measurements have been realized in each of the 150 households. The stages of data collection were the following: before the cooking process (the I stage of measurements), one hour after the cooking process beginning (the II stage of measurements), at the end of the cooking process (the III stage of measurements) and one hour after the end of food preparation (the IV stage of measurements).

In order to assess the conditions of food preparation, a questionnaire was completed using the method of direct interview. From this questionnaire, the answer to only one question was included in the present study – about the sources of fuel used by the population, in order to compare the corresponding concentrations of carbon dioxide for each of them. We have also included in the questionnaire the results of the measurements of air temperature and relative humidity.

The analysis of the results was performed using absolute values with subsequent calculation of indices. In order to specify the degree of significance in comparison to the average values we used the Student test for significance.

To determine the direction and power of the relationship between studied indices we calculated Bravis-Pearson's linear simple correlation coefficient (r). The level of statistical significance of the correlation was established using ANOVA test in the program Statgraphics Plus 2.1. The ANOVA test measures whether a significant factor contributes significantly to the variation of the response and determines the size of the variation that is due to a pure error. If the p-value in the ANOVA table is 0.05 to 0.001, we can say that there is a significant statistical relationship between variables at a confidence level of 95.0 to 99.9%. 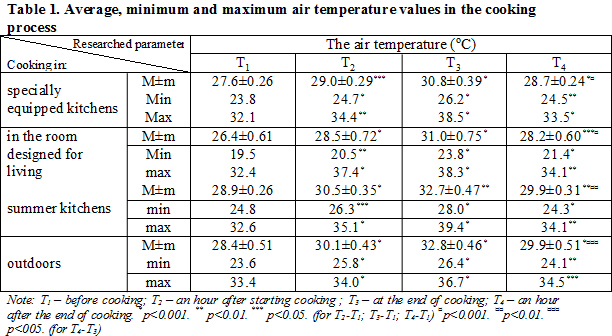 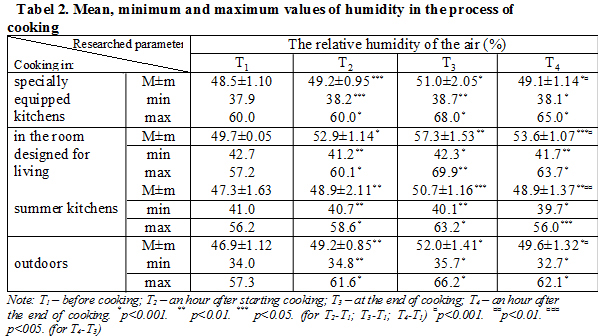 There is a reason to believe that in most cases the increasing of the air humidity depends on the type of products that are prepared, as well as on the humidity of the air.

Meanwhile, at the end of food preparation process, the average amount of carbon dioxide was greater than 0.2 mg/l in all cooking areas. The highest value was recorded in the room designed for living - 0.242 mg/l as the average of all measurements. It stands to reason that this exceeding can be justified by the fact that these spaces have a lower height and smaller volume, few rooms had ventilation hoods (only 2 of 31), two rooms had no windows, and in six rooms the windows could not be opened. The lowest value (0.214 mg/l) was registered when cooking outdoors, but also it exceeds more than twice the normal limits, especially when the fuel source was constituted of wood (r = 0.68), biomass (r = 0.79) and cereal crop residues (r = 0.73).

By comparison, when cooking in summer kitchens and rooms designed for living, the concentration of carbon dioxide exceeded the normal limits even judging by the recorded minimum value (0.13 and 0.12 mg/l, respectively). Considering the maximum value, the concentration of carbon dioxide exceeded the norm in all food preparation areas. The highest value was in the case of outdoor meals preparation (0.4 mg/l), also influenced by the type of fuel used – wood (r = 0.61), cereal crops residue (r = 0.75), biomass (r = 0.66), while the lowest value was recorded in the kitchen areas (0.36 mg / l), which are better-designed spaces. 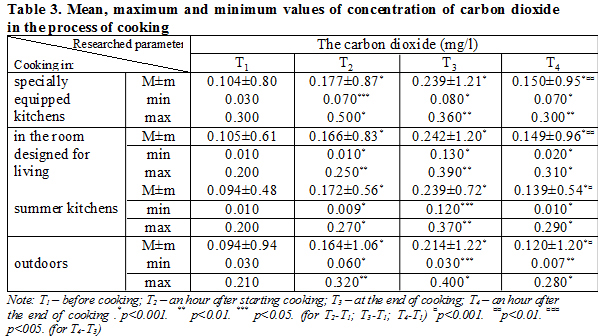 To sum up, the concentration of carbon monoxide was detected in few cases (values exceeding normal limits were recorded in 5 households), especially when preparing food in rooms designed for living and summer kitchen, when the fuel source was composed of biomass and residues of cereal crops. On the other hand, if the evaluation had been realized during the winter, there would have been probably many more results with high concentrations of carbon monoxide.

One of the most striking aspects of this problem is that only a reduced number of the population in Moldova has rooms exclusively for cooking, in other words corresponding to the hygienic norms. Added to that, much better conditions are confirmed in areas provided with natural gas pipelines, and with good ventilation systems.

Cooking in a living room (especially in winter) leads to supplementary pollution of the air in the living space; the situation is maintained by a traditional fuel-saving strategy: thermal preparation of the food is carried out, while at the same time economizing on space heating.

Moreover, the huge amount of people who cook in rooms that don’t correspond to hygienic norms (with no ventilation or improper cooking installations) is at great risk of pneumonia, bronchitis, obstructive bronchitis, or even ischemic heart diseases. All the same, smoking is a supplementary factor that has to be taken into account.

Finally, the current study was initiated because the Moldavian population does not have satisfactory conditions for food preparation, using fuel sources that are harmful to health, which are premises that damage children's health. The results of the research come with arguments and recommendations for the population, in order to decrease the bad impact on people’s health.

Regarding all this data, we recommend increasing the level of information and education among the people of the Republic of Moldova by the means of efficient programs and community intervention projects, in order to raise public awareness of the exposure risks and to stimulate the adaptation of living conditions to a proper indoor environment.