The online edition of the Studii şi Cercetări de Antropologie (SCA) journal (ISSN 2344-2824; ISSN-L 0039-3886) is continuing a half-century tradition of publications on anthropological topics under the auspices of the Francisc Rainer Institute of Anthropology (the former Center for Anthropological Research), within the Romanian Academy.

Probleme de Antropologie (PA), the Institute's first journal, established in 1954, comprised three sections: "General Anthropology", "Paleoanthropology", and "Physical Anthropology". In the first issue, an introductory article signed by the Director of the Institute, Professor Stefan Milcu, evokes the history of anthropology in Romania, respectively the emergence and development of Romanian anthropological research throughout the nineteenth century and until 1920, then between 1920 and 1950. Relevant information on the main anthropological research centers in Bucharest, Cluj and Iași was supplemented by references to prominent personalities from the world of anthropology, such as Eugène Pittard or Viktor Lebzelter, who had conducted research on Romanian communities.

By 1963, seven volumes of the PA journal had been published. Since 1964, PA has been replaced by two journals: Studii şi Cercetări de Antropologie and Annuaire roumain d’anthropologie, the latter being reserved for articles written in French or English.

Studii şi Cercetări de Antropologie has established itself as the main periodical of anthropology in the Romanian language. The journal publishes articles on paleo-anthropology, contemporary anthropology and socio-demographic anthropology, preceded by abstracts in French or English. The evolution of Romanian anthropology can be clearly noticed in the pages of the magazine and in articles signed by several generations of specialists. For eleven years, between 1964 and 1975, SCA appeared with a periodicity of two issues per year. Then from 1975 to 1998, there was only one issue per year. Financial reasons forced the discontinuation of the SCA journal in 1999.

The electronic media have created favorable premises for the resumption of the publication of the SCA journal online since 2012. The editorial team aims to support the development of anthropological research in Romania by fully capitalizing on the outcomes of Romania's accession to the European Union. In this sense, the new series of the Studii şi Cercetări de Antropologie journal was conceived as an anthropological publication with international openness.

Following the successful conferences held by the Francisc I. Rainer Anthropology Institute of the Romanian Academy and its collaborators, starting with 2014, Studii şi Cercetări de Antropologie (ISSN 2344 ISSN-L 0039-3886) is intended only for the publication of abstracts obtained from participants in international conferences.

The other our journal, founded in 2012, Anthropological Researches and Studies  (ISSN 2360-3445; ISSN-L 2360-3445) focuses on the publication of in extenso articles, accompanied by a 250-word abstract. (www.journalstudiesanthropology.ro/en/home.html; Journal indexed in DOAJ, ERIH PLUS, CEEOL, Crossref, Erichplus, etc).

The Authors guidelines for publishing article in extenso, accompanied by a 250-word abstract, can be found here [https://www.journalstudiesanthropology.ro/en/authors-guidelines.html]

After the reviewing process conducted by two independent specialists, the accepted articles in extenso, accompanied by a 250-word abstract, written in English, will be published in the online journal, Anthropological Researches and Studies (ISSN 2360-3445; ISSN-L 2360-3445).

The publication fee for the reviewed in extenso articles, accompanied by a 250-word abstract, resulted from this conference, and accepted to be published in the journal Anthropological Researches and Studies (ISSN 2360-3445; ISSN-L 2360-3445) is 50 euros. (Journal indexed in DOAJ, ERIH PLUS, CEEOL, Crossref, Erichplus, etc.).

The articles in extenso, accompanied by a 250-word abstract, should be word-processed and sent as an attachment until 31th July 2021, depending on the domain, ONLY TO ONE of the addresses in the Home section.

The payment will be made only after the article is accepted for publication, by the corresponding author of the article.

Cover and contents of the last issue of the journal STUDII ŞI CERCETĂRI DE ANTROPOLOGIE - VOLUME 35/1998. 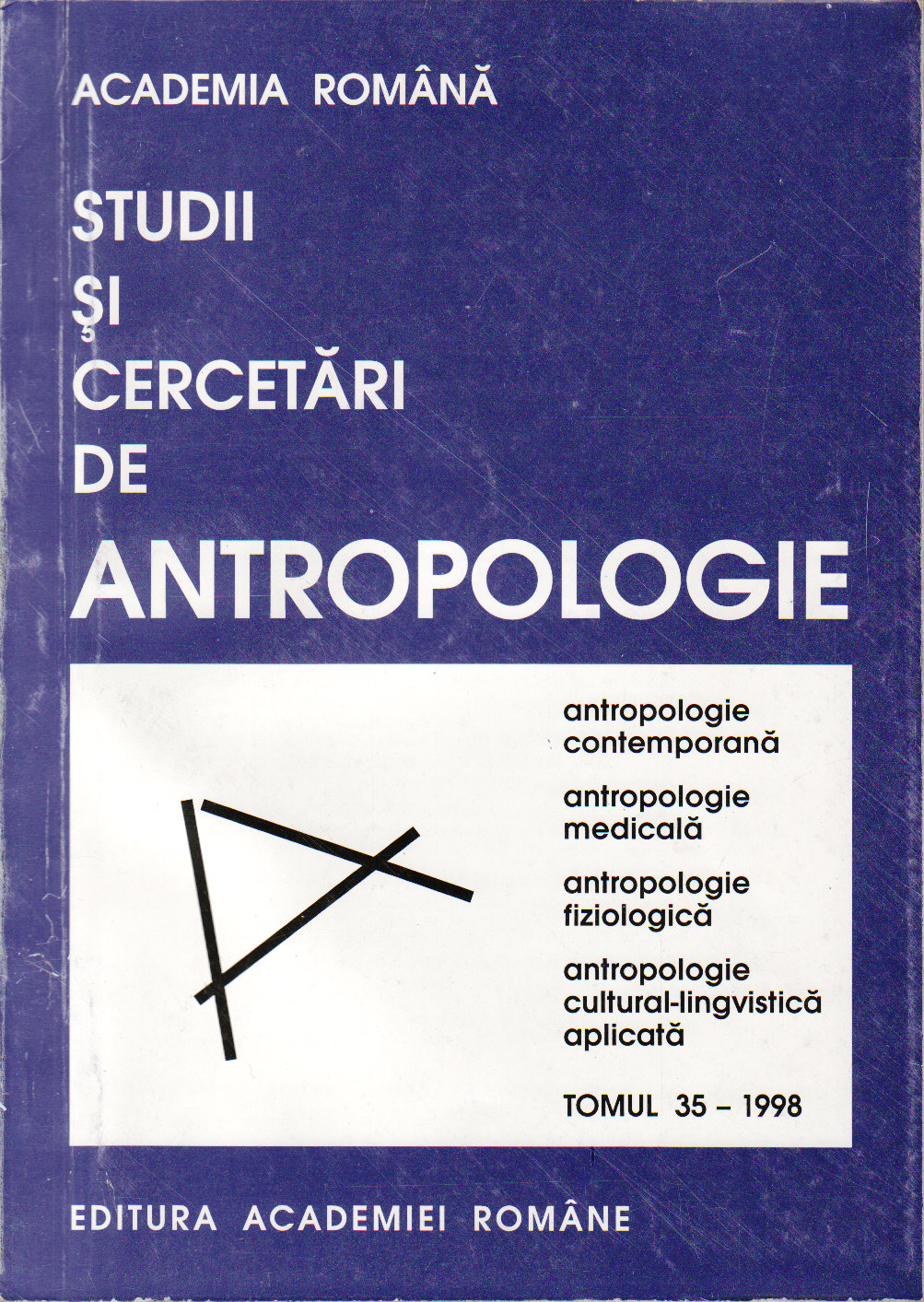 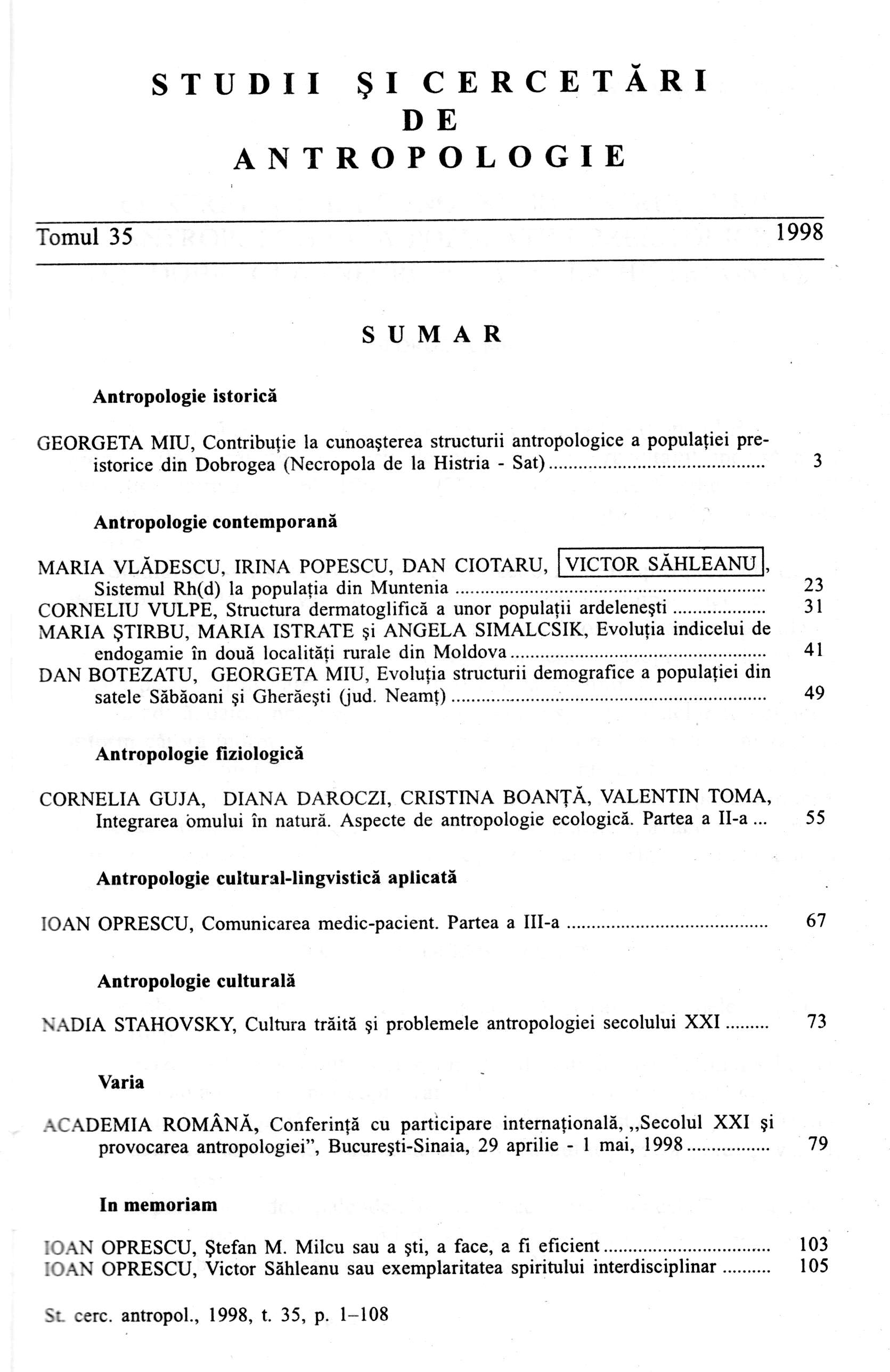